During the last year we have all been missing our meetings. I know in my case some of the time usually spent carving has gone to other things. We are starting to see some activity again though and hope to see some group gatherings again soon. Keep a lookout for emails and keep yourself healthy and safe.

Dave has been busy with another piece of bark. 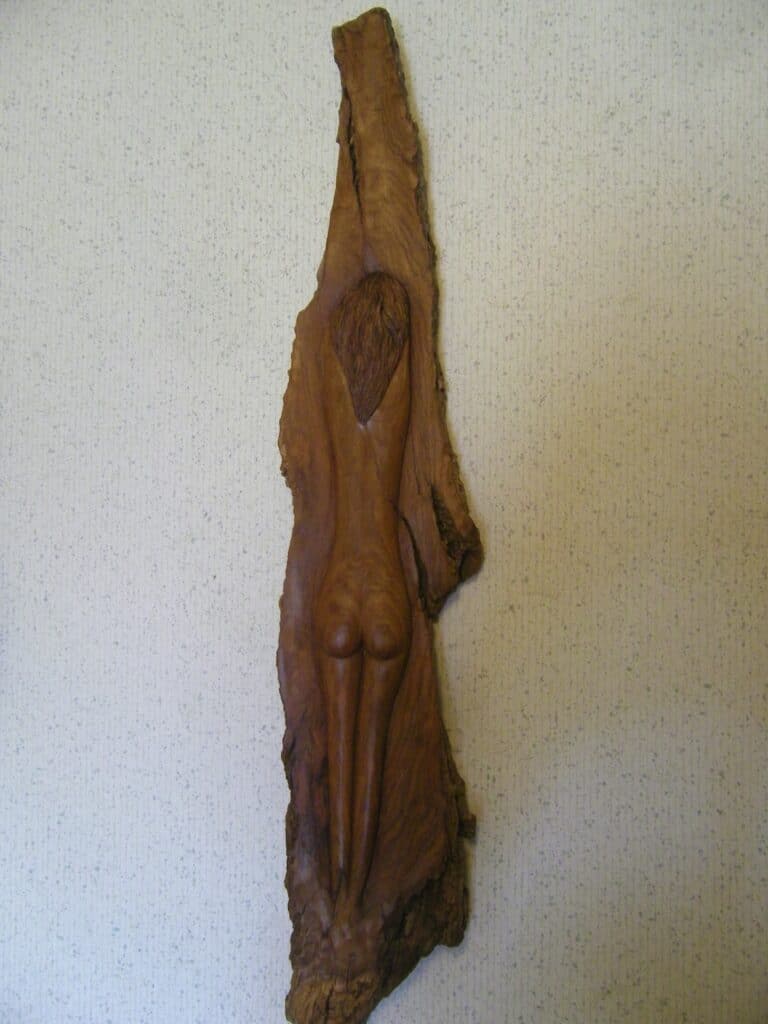 Hope you are doing good. On Thursday, January 14th, a last-minute birthday parade was hosted for Bobbie. As you can see Bobbie and Doug were sitting outside as folks went by wishing Bobbie birthday wishes.

Brad has several carvings started but nothing finished. He is working on lathe projects.

Dave has done the first eagle I have seen out of bark.

David is taking on a different medium. These look fantastic.

Doris is at her burning again.

It appears Dave and Joan have been very busy as well.

I've done very little carving recently and have finished none.

I've been spending most of my time building a wooden gear clock.  The picture below was taken just before I dismantled it to put a finish on it and make some small adjustments to reduce friction.  I've had it running for as much asa little over two and a half hours before it stopped.  All that I really need to do to finish it is to make a nice looking weight.  I've been using plastic grocery bags loaded with ziplock bags filled with lead.

I hoping to get it done and mounted in the house by Christmas.  My wife has wanted one of these for a long time.  She plans on having a completion party when it's done.  Actually it would be a series of small completion parties .

Hope everyone is doing good & staying healthy.   We continue to chill out at home & working on projects.

Here are some of the things I’ve been working on…

I even put Halloween  decorations out in mid-Sept. to enjoy them a little longer…lol

These are the four projects I have completed over the past 6 months:

I must admit I have had difficulty with the incentives to getting me out to my carving bench because of all that is going on. We have stayed healthy but have had to cancel all of our travel plans. I miss seeing you all!

Joan and Dave are both keeping busy with carving and alcohol ink. What do you think?

Jeff has been working on some diamond willow. He took a rest from a piece of bark to make the whale. Cant wait to see the bark Jeff.

Jill is rounding her days out with different projects.  I hear she is using power tools again too.

Joan and Dave have been so busy I had to create a whole section for her. Way to keep busy guys!!

Rob sent this along.

The Mourning Dove set was extremely challenging and if you think all doves are just a dirty grey…think again! Several hundred hours since January went into this project.

The Bald Eagle head is a basswood bust done with knives and gauges.

Hope all is well with all of you!

Dave sent this in. Nice looking Maple Burl wood. He also caught someone trying to escape the lockdown.

Tom sent this in as his FIRST relief carving.

Susan Kleismit send in this picture of her woman praying in the kitchen.

Dave and Joan have been busy with this beautiful Juniper.

Tom sent this along.

"Here's Wimpy and a cowboy bust I just finished painting."

Not sure if this is Dave or Joan but here are two more projects finished.

Jack has been busy also. He has finished a soap stone carving, completed a caricature, and is starting to turn a burl bowl. Cant wait to see that bowl finished..

Tom has been working on watercolor painting.

Brad is in the process of making segmented bowls.

Brad is also trying his hand at painting again. If it looks like a duck he is getting better.

Jeff sent this along.

"I fabricated an air filter/dust collector from some scrap pieces of plywood and some plexiglass stuck back in my tool crib. I bought a 20” box fan and furnace filters at the hardware store. I have less than $20.00 invested."

"I intend to use the unit when I use my Dremel tool, am sanding or spray painting inside in my shop."

Joan is turning santa's into presidents for a friend.

Gary sent this in

"Whenever anyone asks me what I am working on, I reply “I don’t work, I have fun.” I have been having  fun with my mutts, a little different kind of carving for me.

The Ferrari's are getting outdoors and doing some yard improvements. There really is a tree in that picture.....

Bob sent this in.

Carved a statue for my grandson, he owns and operates an ice cream shop in Anoka MN.

The name of his shop is “two scoops” it stands 18” tall. Will give it to on his upcoming wedding day.

Opps, maybe should not post this one till after the wedding?

Looks like Mark is making some good wood chips. Theres a few birds in there as well. Hope to see them painted next week.

Rob has been working on some stubborn Tupelo to make two Mourning Doves.

We just received confirmation from our point of contact our regular meeting facility WILL NOT be available for meetings until further notice.  Thank you for your understanding.

Our pictures from 2020 quarantine have been posted in “World of Decoys”. Take a look

Monthly meetings and board meetings